St. Lucie County's Zora Neale Hurston Branch Library, dedicated in 1991, has a long history of community involvement. The Friends of the Library purchased the property and donated it to St. Lucie County. The Zeta Phi Beta Sorority and other organizations have provided a large collection of Zora Neale Hurston's works, posters, newspaper articles and videos for the public to use for research and enjoyment. Please take time to visit this section of the library to learn more about the world-renowned author buried in Fort Pierce. 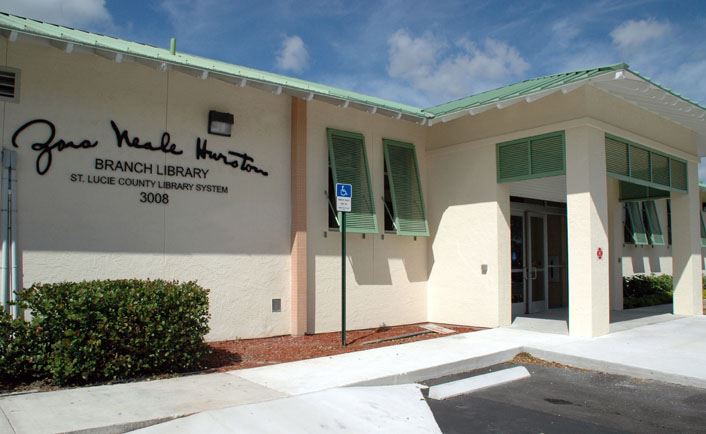 Although Zora Neale Hurston was best known for her novels and short stories, she also wrote and produced plays. An April 21, 2002 New York Times article highlighted the discovery of ten unpublished plays in the Library of Congress' collection. One of the plays, "Polk County," was subsequently performed in New York City. In another rebirth of appreciation, "Spunk" was presented to the public in 1990 at the Public Theater in New York City and "Mule Bones," initially co-written with Langston Hughes, was produced at Lincoln Center Theater, Washington, D.C., in 1991. Florida A&M University's Essential Theater performed "Spunk" in 2002.

In 1933, one of Zora's earliest plays, "The Great Day," was renamed and performed as "From Sun to Sun" at Rollins College in Winter Park, Florida. College staff gave Zora information on how to publish her first book and assisted with the play's performances. "From Sun to Sun" was also produced in Eatonville and then at Bethune-Cookman College in Daytona Beach. (In 1932, "The Great Day" was performed in New York).

Producing plays has always been a problematic and expensive business. It was difficult for Zora to garner support for her play, "Singing Steel," which presented a straight forward, unretouched delivery of folk songs. In a newspaper article written by Frank L. Hayes, Zora was quoted as follows, "Langston Hughes said that unarranged Negro folk songs are merely wildflowers. I answered, 'There are still people who like to look at wildflowers--I do. And, the tame flowers haven't begun to equal them yet.'" Zora would love to see how well received her plays are today.

"I feel that I have lived. I have had the joy and pain of strong relationships. I have made enemies of which I am not ashamed. I have been faithless, and then I have been faithful...I have loved unselfishly...and have hated with all the power of my soul...I have touched the four corners of the horizon, for from hard searching it seems to me that tears and laughter, love and hate, make up the sum of life."--Dust Tracks on a Road (1942)